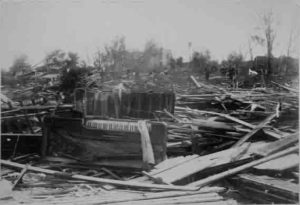 Possibly the deadliest storm in Iowa history ripped through the state on this day (June 17) 134 years ago.

Meteorologist Jim Lee is with the National Weather Service office in Johnston.

“Probably the three worst tornado days in Iowa history, certainly in terms of fatalities, were all in the latter half of the 1800s and this was one of them,” Lee said. The storm on June 17, 1882 traveled more than a hundred miles across west central, central, and southeastern Iowa.

“It produced tornadoes along a skipping path through that part of the state and actually exited all the way down by Burlington and went into Illinois, where it produced more severe weather,” Lee said. “The worst damage was done around Grinnell where a very strong tornado struck the Grinnell College campus.” It’s unclear exactly how many Iowans were killed in the storm, although records from The Tornado Project and the National Climactic Data Center indicate 10 people died near Rippey, seven in Jasper County, 39 in Grinnell and 10 at Malcolm.

“The records of casualties and injuries are incomplete from that era, but it’s likely that more than 100 people were killed,” Lee said. “It could’ve been far worse. There was a ball game in a neighboring town at the time the tornado struck, so a lot of students were out of town attending the game.”

The size and strength of a tornado was measured much differently in 1882, but Lee says the one that ripped through Grinnell was at the top end of the scale, F5. Such tornadoes are rare in Iowa.

“On average, we get maybe one every couple of decades,” Lee said. “The last F5 tornado in Iowa was the Parkersburg storm in 2008. Previous to that, the last one was in 1976.”

Also on this date, in 1978, a severe thunderstorm cut a path of damage from around Sioux City through Ida Grove and Rockwell City to Webster City. Softball sized hail fell in and around Ida Grove breaking thousands of windows, totaling cars, and shredding crops. Strong winds and large hail around Webster City uprooted trees and damaged power lines, cars, and houses.