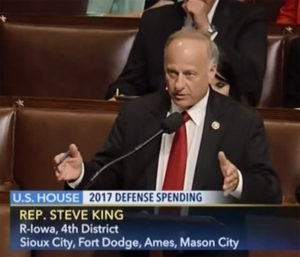 Congressman Steve King talks about his proposal on the House floor.

The Republican-led House has narrowly rejected a proposal to ban so-called “DREAMERS” from enlisting in the military.

President Obama issued an executive order deferring all deportations for young adults who were brought into the country illegally when they were children. Republican Congressman Steve King argues those young people do not belong in the military.

“They broke the law to come into America, then they lied to get into the military and then they took an oath to support and defend the constitution of the United States,” King said during remarks on the House floor. “So I’d say: Which of those three times were they really honorable?'”

King and other Republicans accuse the president of trying to get “backdoor amnesty” for these so-called “DREAMERS” who enlist in the military.

“I think there’s something missing from this debate,” King said. “It’s an assumption that if we have someone in the military, that somehow they’re legal. The president can’t legalize people that unlawfully present in America…He just asserts that executively and we have to go to court, then, to reverse it and get the courts to change that.”

The ban King supported lost by one vote in the U.S. House. Critics of the ban say the military needs the “best and brightest” and those who have known no other home than America should be able to serve.

Two years ago the U.S. military began enlisting undocumented immigrants with special medical or language skills. If they wind up serving in a combat zone, they are granted U.S. citizenship.