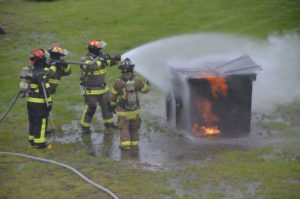 The Iowa Department of Public Safety’s and Division of Criminal Investigation are investigating the Fire Service Training Bureau on the Iowa State University campus in Ames.

A news release from the Department of Public Safety says the investigation involves scoring for individuals who took classes from the Fire Service Training Bureau.

The release says former Bureau Chief Randal Novak retired on June 2nd. He had served as the bureau chief since February 12th, 2001 and was placed on paid administrative leave on April 25th.

It also says certification and accreditation coordinator John McPhee was placed on paid administrative leave on April 25th, 2016. McPhee had worked for the Bureau since February of 1998. The Fire Service Training Bureau is Iowa’s designated state fire academy, providing training to Iowa firefighters since 1923.

DPS says no further information will be provided on the investigation at this time.