You are here: Home / News / People hang off building in Sioux City as a fundraiser 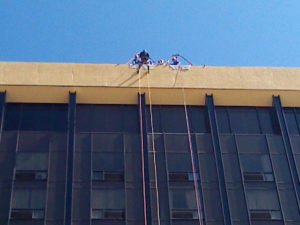 Going “Over the Edge” in Sioux City.

Dozens of people rappelled down the side of a tall building in Sioux City this week — all for a good cause. It was a fundraiser for Sioux City’s Big Brothers Big Sisters organization.

Executive director Rocky Welker says the event raised over $65,000. “All of the money is going to stay here and positively impact children here in Siouxland,” Welker said. “We’re going to use that money to go and recruit mentors for the 33 (kids) waiting for a big brother or big sister.”

Participants in the event were guaranteed a spot if they raised $1,000 or more. Ben Uhl of the 185th Air National Guard was one of those who took the 12 story challenge. He posed for a “no hands” photo as he went over the side of the building.

“I was pretty tight before I let go,” Uhl said as he chuckled. “I wouldn’t have done it if they hadn’t asked…but, it was fun. You’re nice and secure. They go through all the safety aspects of it and I knew I wasn’t going to fall.”