You are here: Home / News / Cedar Rapids sends geese to locker after annual round up 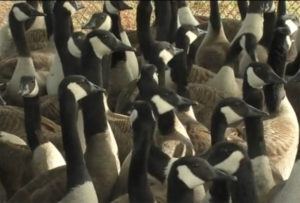 Cedar Rapids parks workers held their annual round up of geese around ponds, lakes and the Cedar River inside city limits on Monday, but the final destination for some of the geese changed this year.

The round ups started about 20 years ago and the Iowa Department of Natural Resources (DNR) would release all the captured geese later at distant lakes or wetlands to discourage their return to the city in an effort to control the exploding goose population and accompanying mess.

The city decided to take more drastic action this year as the adult geese were taken to an area meat locker. Cedar Rapids parks superintendent Daniel Gibbins told KCRG TV the extreme measure of killing the adult geese to reduce the population is subject to review next year.

“We’ll look at it again next year with the DNR and we don’t know if we’ll do food processing next year or not,” Gibbins said. Juvenile geese born this year who were captured were banded and released as usual in remote locations with the idea they will find homes elsewhere and not return.

The city workers caught, banded and later released 285 young geese. Another 161 adult geese went to a meat locker. The Hawkeye Area Community Action Program (HACAP) will distribute the processed goose meat to needy families. The city is paying for the processing.