You are here: Home / Agriculture / Co-op in Craig sees grain bin destroyed within days of its completion 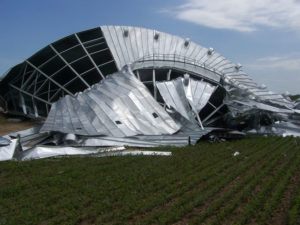 Owners of the Farmers Cooperative Elevator in Craig hope to rebuild this grain bin in time for fall harvest.

The operator of the Farmers Cooperative Elevator of Craig hope to rebuild after a new grain bin under construction was blown off its concrete foundation in a storm this weekend.

The structure was about a week away from completion. It would have been able to store up to 748,000 bushels of grain. Farmers Cooperative Elevator manager Doug Schurr says the estimated value on the new grain bin exceeded one million dollars.

Officials with the grain elevator hopes to be able to rebuild the grain storage bin prior to the start of harvest this fall, but Schurr admits it may be a tight schedule. He says it will be at least six weeks before the materials for a new grain bin become available, and another three to four weeks to construct the grain storage facility.

Schuur is hopeful the Craig grain elevator will be given priority status by contractors, and not having to wait until after previous construction commitments are completed.