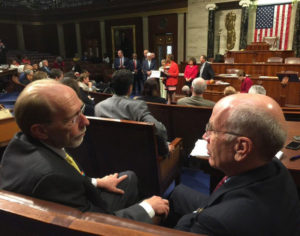 Congressman Dave Loebsack of Iowa City spoke late Wednesday as he and his fellow Democrats staged a “sit in” on the House floor to protest lack of action on gun control legislation.

“No bill, no break. No fly, no buy,” Loebsack said at the end of his remarks. “That’s what this is about folks.”

House Speaker Paul Ryan tonight said on CNN that Republicans will not vote on legislation that would infringe on the right to keep and bear arms without due process. Ryan called the sit-in a “publicity stunt.”

“This isn’t a stunt,” Loebsack said in remarks on the House floor at about 10 o’clock Iowa time. “This is as far as a stunt as we could possibly have…We’re serious about this.”

Loebsack said Ryan is trying to “diminish the significance” of the sit in.

“We are tonight mobilizing not only people in this body, but thousands and hopefully tens of thousands of people around this country,” Loebsack said on the House floor. “That’s why I’m here tonight, so I can speak out on this issue, so I can speak for those folks who’ve been victims of gun violence, for the survivors, for the families, for all the rest.”

House cameras were shut off when the sit in began. A few congressmen with cell phones used “Periscope” to livestream the protest and C-SPAN broadcast that live video into the night hours.

Loebsack’s remarks came shortly after a Republican congressmen came on the floor, arguing that Islamic terrorism was the problem to resolve.

(This post was updated at 10:41 p.m. with additional information)