You are here: Home / Agriculture / Sweet corn could be ready by July 4th weekend 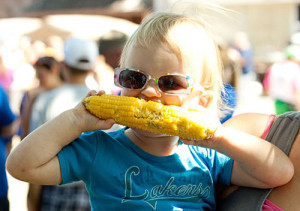 Michelle Christenson co-owns one of the state’s largest commercial sweet corn operations, Grimes Sweetcorn, located west of Des Moines. She’s hoping their crop will be ready to sell over the upcoming holiday weekend, but they won’t risk removing the ears from the field before they’re fully mature.

“You don’t want to go in too soon and have (kernels) that are all white or not quite ready…and then people are unhappy because it’s not a quality product,” Christenson said.

In Iowa, it’s difficult to have sweet corn ready by July 4 because of the state’s unpredictable weather. “You have to have a lot of things go your way, as far as a little bit of warmth in the spring and a chance to plant it early…and then not have a freeze that kills (the crop),” Christenson said.

The recent heat and rain have helped speed the growth of most Iowa crops, including sweet corn, which struggled in the month of May. “It was laying a little dormant when we were cooler than normal in May, but it’s playing catch up now that we’re hotter than normal in June,” Christenson said. Many Iowans will be disappointed if they have to go without homegrown sweet corn over the July 4 weekend, but Christenson expects that could be the case — especially since the actual holiday falls on a Monday.

“A lot of people who are leaving or camping would want it on (July 1) and that’s going to be really hard. That’s early,” Christenson said. “We’re telling people to just check back for updates toward the end of (June).”

According to the Iowa Department of Agriculture, about 3,400 acres of sweet corn is grown in Iowa each year.