You are here: Home / News / Weather conditions spur lots of bacteria, but no blue-green algae at state lakes 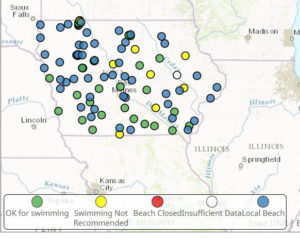 The weekly monitoring program that tests waters at the state park beaches is now into its fifth week.

The coordinator of the program, Mary Skopec, says there’ve been some good early results.

“So far this year we haven’t seen any of the blue-green algae toxins — that’s a good thing,” Skopec says. “We had regular bacteria impairments, we’ve had a number of rainstorms bringing bacteria into our lakes. Heavy rains early in the season are not unusual, but some of the levels we have seen have been pretty high.”

Skopec says they did see some high bacteria levels in the Great Lakes region in northern Iowa, which is not common. “We normally don’t see very high levels of bacteria at the Okobojis, and last week they got hit pretty hard. So we saw a number of advisories at beaches where we normally don’t see that,” Skopec says. The heavy downpours that have been popping up create problems as the water runs off quickly.

“If we see very heavy rains it’s hard for the ground to absorb a lot of that water and we do see the bacteria being washed off from the landscape into the beach and the bacteria levels spiking. So, that certainly is a driver, those heavy rains that we’ve had this year,” Skopec explains. She says the good news is sunshine following the heavy rains helps kill off the bacteria.

Skopec says the blue-green algae can pose a larger problem. “Because they are a toxin and the illnesses can be more severe — including things like respiratory distress where people have a hard time breathing,” according to Skopec. “We do see pet issues as well with the blue-green algae, so it is a little bit or concerning than the bacteria which tends to be a little stomach upset and some diarrhea, which is uncomfortable but not nearly as severe as the blue-green algae illness that you might see.”

You can go online and see the weekly testing results at the Iowa DNR website.