You are here: Home / News / O’Malley says U.S. will ‘careen over the fascist cliff’ with Trump (AUDIO) 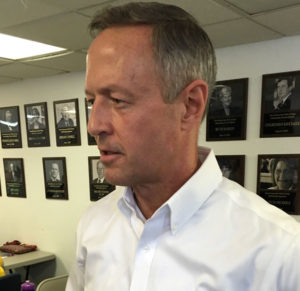 Former 2016 Democratic presidential candidate Martin O’Malley is in Iowa, on a mission to unite his party behind Hillary Clinton and get the country to reject what he calls the “fascism” of Donald Trump.

Late this afternoon O’Malley stopped to give a pep talk to people at Iowa Democratic Party headquarters making phone calls to voters. O’Malley said the primary contest had been “hard fought.”

“And the candidate that succeeded is Hillary Clinton, who all of you are working hard for,” O’Malley said, drawing cheers and applause from the crowd, some of whom had supported him during the Iowa Caucuses. 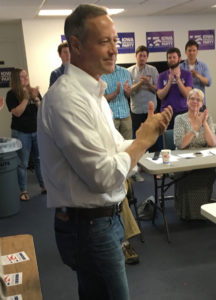 O’Malley told the group it was time for the “energies” of Sanders supporters to unite behind Clinton — and ensure the defeat Donald Trump.

“I can’t believe in our lifetimes that we would ever actually see a fascist candidate take over one of our major parties, but that’s what’s happened this year,” O’Malley said. “The appeals, the methodology, the mean-spiritedness of the Trump campaign is a fascist appeal.”

O’Malley told reporters later that Trump should have “no appeal” for Sanders supporters.

“I do know how important this election is,” O’Malley said. “I’m going to put all my energies into making sure that we don’t careen over the fascist cliff here as a nation.”

O’Malley endorsed Clinton earlier this month, after she had secured enough delegates in primary and caucus contests to win the nomination. O’Malley is meeting with some of his Iowa campaign staff and volunteers at a Des Moines bar tonight. He’ll be in Sioux City early Friday afternoon to speak with volunteers at a Clinton campaign field office.

On Friday night, O’Malley will be in Sioux Falls to speak at the South Dakota Democratic Party’s state convention. Former Iowa Governor Tom Vilsack is on Friday’s speaking schedule in Sioux Falls as well.

A spokeswoman for the Republican National Committee says if a “failed candidate” like Martin O’Malley is the best surrogate Hillary Clinton can find to send to Iowa, then her campaign is “a train wreck of epic proportions.”