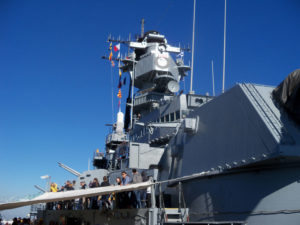 Hawkeye fans on the USS Iowa in December.

The caretakers of the battleship that bears our state’s name are looking to get a little national publicity in an online contest.

“The contest is run by Readers Choice Group and it has been going on I believe all year for different segments of the travel and entertainment amusement fields — I believe the U.S.A. Today is handling the contest,” Bossenmeyer explains. “…we were nominated along with 19 other ships to be considered the best museum ship in the United States,” Bossenmeyer says.

You can go to www.10best.com and then the best museum ship category to vote for the USS Iowa.

The state of Iowa help provide funds to save the historic battleship and have it towed to Long Beach, California where it now serves as the museum. Thousands of Iowans toured the ship in an event prior to the Hawkeye football team’s Rose Bowl appearance. “I was amazed at the patience that day….I’ve never seen our line to get on our ship that long. People waited in line to take and hour-and-a-half tour that day that probably went for three to four hours that day because of the amount of people in line,” Bossenmeyer says. 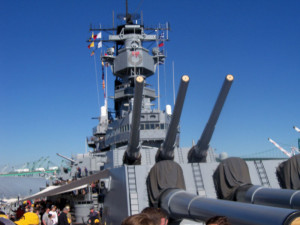 Anyone who shows and Iowa driver’s license can tour the ship for free when they visit, but Bossenmeyer says they have plenty of things to make people from other states want to see the ship.

He says they have had other museum ship administrators have come out to see how they run the Iowa and he says they have made great strides in the four years they have been operation. Bossenmeyer says they are the only ship that has an interactive tour.

“Let’s say you are over in the 16-inch gun turret area, you will get to experience what it was like to have those guns fire off,” Bossenmeyer says. “And that video content or whether it’s augmented reality will be fed to you. No other ship in the United States is running that technology right now.” He says there are other things that make the USS Iowa stand out.

“We’re are the only ship that has a bathtub on board — and that was put in for FDR. We’re called ‘the battleship of presidents’ because we’ve had the most sitting presidents on board our ship. So, little things like that make us a little unique. It’s not to take anything away from the other ships, they are fantastic,” Bossenmeyer says.

The are some other iconic ships in the competition, including: the USS Constitution, the oldest U-S battleship afloat; the USS Missouri, the ship where the Japanese signed the surrender documents ending World War Two; the captured German submarine U-505; the aircraft carriers Yorktown, Midway and Lexington.

Bossenmeyer says the weekends are the busiest time for visitors, averaging between 1,200 and 2,000 people on Saturday and Sunday. He says they also offer education programs so they get kids from many local schools who come out for the free programs. “We also have a camp battleship program where local scouts come out and learn what it is like to be a sailor for the evening,” Bossenmeyer says.

A new exhibit will open July 1st. “We’ve add 360 panoramic views of the areas on board that most likely the public will never get to just because the steepness of the stairs. So, we’ve done the best to create an environment so you can see what it is like in an engine room, see what it is like in a generator room,” Bossenmeyer says.

You can vote for the USS Iowa once each day through noon on Monday July 18th. The winner will be announced on Friday, July 22nd.