You are here: Home / Fires/Accidents/Disasters / The floodgates are closing for Lake Delhi to fill back up 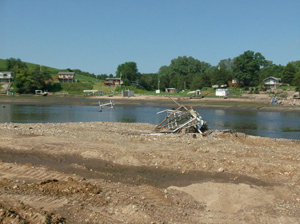 A lake in northeast Iowa that was lost six years ago will finally be replenished beginning today.

Officials plan to close the floodgates and start refilling Lake Delhi in Delaware County. Steve Leonard, president of the Lake Delhi Combined Recreational Facility and Water Quality District, says it could take three to four weeks for the lake to refill if there’s not much rain.

“If a very large rainfall event like what Cedar Rapids experienced a few days ago, like a four inch rain…if that were to happen in our watershed, it would fill up our lake probably in a matter of two or three days,” Leonard said.

The nine-mile-long lake on the Maquoketa River disappeared in July 2010 when torrential rains and flooding caused the previous dam to fail. Leonard is surprised it’s taken six years to restore Lake Delhi.

“I would’ve guessed it would have taken much less time,” Leonard said. “We had a lot of what I would call governmental bureaucracies throughout the entire process to reconstruct and a lot of educating to do in terms of residents across the state of Iowa, as well as key stakeholders.” The $16 million restoration project involved a local bond issue that was approved by voters — while other money came from the state and private donations. A grand opening celebration is being planned for the weekend of July 23 and 24.

Leonard says the event will involve live music, kids activities, fireworks, and a ceremony on July 24 marking the six year anniversary of the dam breach.