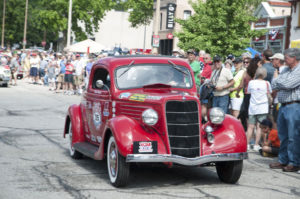 Cars built before 1972 can run in the Great Race.

A vintage automobile rally will be rolling through Iowa today.

The most important rule of the race is that drivers can’t use electronic devices like cell phones, GPS units, or computers. “The real trick is being able to navigate stop signs and turns where you can’t obviously hold speed or you have to stop, or you engage a train or any traffic, and knowing how far behind you are and how to make up that time,” Stumb says.

The vintage car rally will make a stop in Mason City shortly after 1 p.m. in East Park as part of the Cannonball Day celebration. The rally continues to Cedar Rapids for an overnight stop before the final leg of the race to the Quad Cities on Sunday.