You are here: Home / Fires/Accidents/Disasters / Bear hit and killed by a truck in Allamakee County 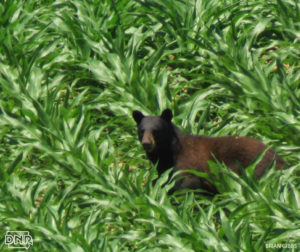 The DNR posted this photo online of the bear in northeast Iowa.

A bear struck and killed by a truck is believed to be the same animal that was recently caught on camera wandering around in a northeast Iowa cornfield.

Department of Natural Resources spokesman, Kevin Baskins, says the bear died after being hit Friday night on Highway 76 near the Yellow River Forest in southeast Allamakee County. He says the bear was struck by a glass delivery truck and there was not much damage to the truck. Baskins says the driver of the truck was not injured.

The young bear weighed about 200 pounds, and Baskins says is looks to be the one spotted recently in Clayton County. “We really feel that that’s likely. When we look at the bear that got hit and that picture that was on social media last week, it had that same kind of cinnamon coloring on the shoulder,” Baskins says. “We feel fairly confident that it was the same bear.”

Baskins says bear was probably not used to moving in areas where there are cars and trucks. “It think that’s part of it. I think the other part that you run into is with their coloration at night, they are extremely hard to see,” according to Baskins. “And then when you get up into Allamakee County, there’s a lot of trees, a lot of tree lines. So, something could come up out of that ditch relatively quickly for a motorist.”

The DNR is now examining the bear to try and learn more about it. He says they will be doing some analysis of the animal to try to learn some things like what it was eating. It’s believed the bear will eventually be put on display at a new nature center in Allamakee County. The new nature center is near Lansing. The last bear reported to be killed in a traffic accident in Iowa was just over one year ago on U.S. Highway 20 near Jesup.

“It’s not terribly uncommon to see them in northeast Iowa,” Baskins says, “both Minnesota and Wisconsin do have breeding populations of bears. And bears like other wildlife will wander — particularly those adolescent animals.” He says the wandering bears are likely to find conditions to their liking in the area.”When you get up into northeast Iowa there’s pretty good habitat for bears. A lot of trees with the river and they can move around in fairly large areas and be fairly secluded,” Baskins says.

There were at least three to four black bears reported several times as they moved around northeast Iowa in 2015. Mushroom hunters found a dead bear along the Fayette-Clayton County border in May of 2015, along with the bear that was struck and killed on the highway.