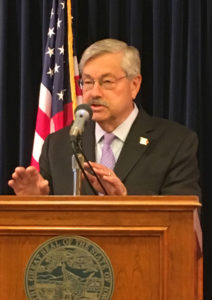 Iowa’s Republican governor says there is no impact on Iowa laws from today’s U.S. Supreme Court ruling which struck down key parts of a Texas law on how abortion clinics must operate.

“I’m disappointed that the Supreme Court made that decision,” Governor Terry Branstad told reporters a few minutes after the ruling was issued this morning.

The Texas law required abortion clinics to be near hospitals, so doctors performing abortions can admit patients to the hospital if there are complications. The bill was passed by the Texas legislature in 2013. It also required abortion clinics to meet certain building, equipment and staffing regulations as well. The Iowa Board of Medicine tried to make some of the same requirements as Texas for so-called “tele-med” abortions and Branstad told reporters he’s disappointed that Iowa’s Supreme Court struck down Iowa’s law.

“I think that the states should have the right to determine those matters, but this was a law that was unique to the state of Texas,” Branstad said. “…We believe the states ought to have the right to be able to protect the safety and well-being of their citizens with regard to abortions.”

Some critics of today’s U.S. Supreme Court ruling say it’s the final straw for Texans who’re upset by federal overreach and they’re pushing the idea of having the state succeed. Branstad said he understand the frustration, but he’s not in favor of a Texas exit.

“We are not the European Union. We are the United States of America and this is a unified country, but we’re also a federalist system,” Branstad said.

Branstad said people in Texas “and in Iowa” are upset that “state’s rights” are being “whittled away” from the courts and the Obama Administration.

AUDIO of Branstad’s weekly news conference, where he was asked about the court ruling