You are here: Home / News / It’s a waiting game as Lake Delhi begins filling back up 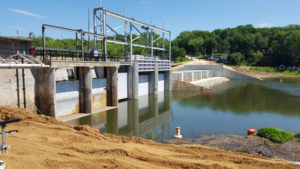 Lake Delhi is slowly filling back up after the flood gates were closed Friday.

All that is left is a little more waiting for Lake Delhi to fill up again, six years after flood waters breached the lake’s dam and it drained down in minutes.

Dozens of Lake Delhi supporters and local officials attended a special ceremony Friday to close the floodgates and allow the lake to refill. Longtime Lake Delhi property owner and engineer Pat Colgan says the newly-reconstructed dam has four parts, with the spillway being one of the most important.

He says the water will come up to the top of the spillway to lake level and anything more than the lake level will flow over the top. “So, it’s truly a run of the river dam,” Colgan says. The old dam gave way on July 24th, 2010, after historic rains. Coglan says the new spillway will serve as the first control of the water level.

“Eighty-five percent of the time that will control the lake level, and then when you get higher flows then the flood gates kick in,” Coglan says. “It’s all automatic.” Lake Delhi property owners formed a taxing district in the months that followed the dame breach and then approved a six million dollar bond measure for the new dam and restoration, with the remaining ten million dollars coming from private donations, the state and Delaware County.

It’s not know exactly how long it will take to get the lake full again — it all depends on how much rain falls and the flow of the river. The area got one inch of rain Saturday night and local reports Sunday say the lake level was up 18 inches.

There is a grand opening planned for the lake Saturday, July 23rd and Sunday, July 24th.