You are here: Home / News / Dry conditions continue in central and southern Iowa 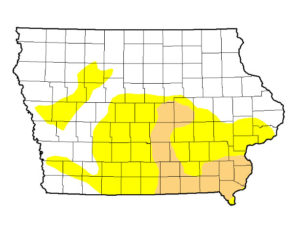 Drought conditions continue to get worse in Iowa.

“This is the peak heating of the summer. The warmed days like this are prone to drying things up quite a bit. June is also typically our wettest month of the year and we really haven’t reached those levels at all in many parts,” Small says, “So that’s why the drought is worsening in many areas.” Small says the dry conditions have happened rather quickly and could turn around just as quickly with some rain.

“This time of year a big thunderstorm outbreak and torrential rains could certainly eliminate it in one event. The worst conditions we have are across the state right now is a D-1 drought, in the moderate category. If it gets worse than that it would take more than one event,” Small says. Some areas of the state got rainfall this weekend, but the forecast isn’t showing any extend change for rain.