You are here: Home / Sports / Castroneves will look to continue climb at Iowa Speedway 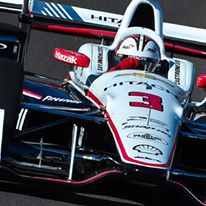 Helio Castroneves will try to climb closer to the top of the IndyCar Series lead when he races at the Iowa Speedway July 10th, in the Iowa Corn 300. Castroneves is coming off a fifth place finish at Road America in Wisconsin and is second in the standings, just 74 points behind his Penske teammate Simon Pagenaud.

Castroneves has 23 career IndyCar wins, including three Indianapolis 500 titles, but he has never won the series championship.

“You are looking for new goals and this is a personal goal of mine”, said Castroneves. “But if you ask me to trade some of my Indy 500 wins I would say negative. I will keep my Indy 500 wins and hopefully we can get another one.”

Castroneves has had a very consistent season. He has accumulated five top five finishes but it still in search of his first win.

“It is unbelievable and it has been so competitive. We were very close to winning in Detroit and Long Beach and hopefully a little bit of luck will give us the opportunity.”

Castroneves was the pole winner a year ago at the Iowa Speedway and eventually placed 11th in the event, which was won by Ryan Hunter-Reay.