You are here: Home / Education / University of Iowa part of space project that will reach Jupiter on July 4th 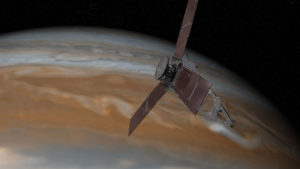 NASA illustration of Juno over Jupiter.

After a journey through deep space of almost five years, a spacecraft carrying a little piece of Iowa is about to arrive at its destination in orbit around the planet Jupiter.

An instrument onboard NASA’s Juno probe was built at the University of Iowa. U-I research scientist Bill Kurth says the instrument called Waves will analyze Jupiter’s auroras, a phenomenon known as the Northern Lights on Earth.

“We’re going to be studying the physics behind those auroras and Jupiter’s auroras are 1,000 times more intense than those at Earth,” Kurth says. “We really want to understand why Jupiter is so intense. We have some ideas but going there will be the proof in the pudding.”

Kurth is the lead co-investigator on the Waves project. On Earth, the Northern Lights are caused by charged particles from the sun striking atoms in the atmosphere. It produces a spectacular light show, with dazzling waves of green, yellow and purple dancing across the night sky. As yet, we haven’t seen Jupiter’s auroras from Earth, but we know they exist.

“We would not see Jupiter’s auroras, especially from our point of view, because we would be looking at the day side,” Kurth says. “However, the Hubble Space Telescope, using ultraviolet observations, has made a large number of images of Jupiter’s auroras. They’re very complex.” Juno was launched in August of 2011 and is due to reach Jupiter’s orbit on Monday — July 4th. Kurth notes the date of America’s Independence is a wonderful day for this accomplishment though it’s purely coincidental. The spacecraft should be sending back data for the next year and a half.

“The mission is designed to go until February 20th of 2018,” Kurth says. “During that time, it will execute 37 orbits around Jupiter. These are unique orbits. These are polar orbits. They’ll go over the poles of Jupiter. This is the first time a spacecraft has done that at Jupiter.” It’s hoped by observing Jupiter’s auroras, we’ll better understand the phenomena on Earth. Juno will also be gathering data on Jupiter’s origins, its atmosphere, its magnetosphere and some of its intriguing moons.

The moon Europa is a global ocean of water, while the moon Io is the most volcanically-active world in our solar system.