You are here: Home / Crime / Courts / Iowans testify in Washington about scams against the elderly 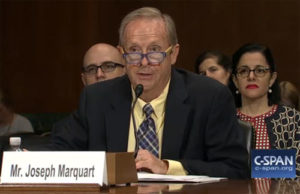 Two Iowans testified in Washington, D.C. Wednesday about scams aimed at taking money from the elderly.

Joseph Marquart from AARP Iowa told the story of Karla Sibert who learned her parents were being scammed while helping them during a medical issue. Sibert learned her mom had been getting calls from a company called Leading Health Source pitching supplements.

“A man would call her and persuade her that she would feel better with their products and she started buying their supplements — eventually giving him access to all her credit cards. Karla’s mother believed she had only spent 500 dollars on the supplements,” Marquart explained.

Sibert learned the company had actually charged them for some $44,000 worth of supplements. “Fortunately Karla had a power of attorney for her parents and was able to use it to help them,” Marquart says. “With the help of the office of the Iowa Attorney General — and through her own dogged determination — Karla’s parents were able to get all of their money back. And Leading Health Source is no longer able to market supplements in Iowa.” 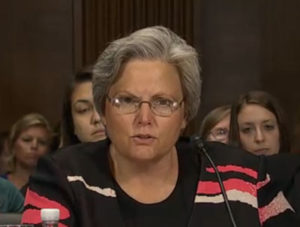 The Director of the Iowa Department on Aging, Donna Harvey also testified before the U.S. Senate Judiciary Committee. Harvey says lottery scams target the elderly and she says the victims are often unwillingly to admit to family what has happened. She talked about the case of an Iowa woman who believed her mother had been scammed.

“Mom denied it every step of the way, and only when there was an intervention of everybody at the same time with this individual did she finally admit that she had been scammed,” Harvey says. “And at some point she said that the only person I confessed this to was the priest during my confessional time.”

Harvey says the guilt the person feels after being scammed can prevent them from seeking help from family and others. “I think that is representative of what we’re seeing — is that it is a very embarrassing admittance — they need a safe place to share it and family is not always the best to do that,” Harvey says. She says between 3.5 to 5.6 percent of older Americans are involved in financial exploitation. Harvey says that’s between 17,000 and 28,000 people in Iowa. Harvey says they’ve survey the elderly on ways to help them.

“The primary thing that they would like is a toll-free line where they’re comfortable making the call without anybody having an opinion and not a local appearance with that,” Harvey says. She says they’ve found having a website is not the best way to reach the elderly as many don’t rely on websites for information. Iowa Senator Chuck Grassley held the hearing, and was joined by Minnesota Senator Al Franken who talked about a proposed law called the Senior Safe Act. It would allow bank employees to report transactions by the elderly that might involve know fraudulent organizations. Current law prevents them from doing so.

Harvey says the law appears similar to one that was implemented in Iowa in the 1980s. “We trained utility workers to be gatekeepers. So, it gave them a safety net if they saw something wrong with an elder living by themselves — that they had the right to report that without any kind of ramifications. It worked well and we still utilize that program,” Harvey says. Harvey also talked about the need to share more information about the various programs that are working to stop elderly fraud. Studies indicate that it’s the most widespread form of elder abuse, costing older Americans as much as 36 billion dollars each year.