You are here: Home / News / Iowa DNR marks 30 years of conservation and recreation

A state agency that impacts many aspects of life in Iowa turns 30 years old today. Department of Natural Resources director Chuck Gipp says the governor and legislature created the DNR by combining four agencies in 1986.

“There was an energy bureau, there was the environmental services side of the agency, there was the con (conservation) and rec (recreation) side of the agency, and the Iowa Geological and Water Services which was over in Iowa City all got combined into the Department of Natural Resources that we know today,” Gipp says. Gipp is a former legislator who has led the DNR for five years, and says there are still those who think the DNR oversees too many areas.

“There’s still a couple of people left over that think you should spilt the department back up into at least two,” according to Gipp. “Some complain that the representation of the department is dependent on the performance of the law enforcement officers. And then the other side of the agency — the con and rec side — think that the negative opinion is because of the field services side that has to go out and investigate complaints. We actually think, our management team thinks, that the department as it is, is what it absolutely needs to be.”

The DNR is highlighting 30 of what is says are success stories for the agency. One of those is the removal of large piles of thousands of used tires that developed after the tires were banned from landfills. “One of the concerns with the zika virus that’s occurring in others states….the Departments of Public health has determined that waste tires are a good place as a breeding ground for the mosquitoes that carry that. Iowa has been way ahead of the game for waste tire reduction. A lot of states are still grappling with that,” Gipp says. 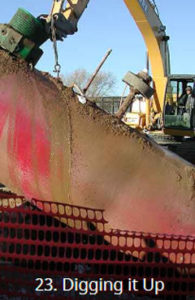 Cleaning up leaking underground storage tanks is one of the accomplishments listed for the DNR’s 30th anniversary.

The clean up of leaking underground fuel storage tanks is another success. “”In Iowa there were anywhere between eight and ten-thousand of these sites. You often saw in your small towns that there was a gasoline station on each corner and you often as a result of that saw that there was a leaking underground storage site at these little intersections as well,” Gipp explains. The governor signed legislation this year ending the underground cleanup program.

Gipp says a big change in the state came in the decision to take landfills from random piles of garbage in each county and city to a more regulated system. He says it was determined that it was better to use lined landfills. Gipp says a result of that was to create the recycling programs to save money by keeping more garbage out of landfills. “So we in Iowa not recycle about 50 percent of the waste that used to formerly go into landfills.”

Cleaner air and water are cited on the list too. “When it comes to the air in Iowa, emissions are down 33 percent since 2009, so that has been a huge success,” Gipp says. “The Clean Water Act has given us the type of regulation to ensure — not 100 percent — but to ensure that the Flint, Michigan problem won’t occur here in Iowa.” The DNR has seen a lot of success in programs to bring back the bald eagle, the trumpeter swan, peregrine falcons, breeding trout, and the management of other wildlife.

“I distinctly remember as a child growing up in Decorah, Iowa that if you wanted to see Canadian geese you had to go to Rochester, Minnesota to Silver Lake up there. Today you can’t find a spot without geese — a beautiful animal and in some cases a nuisance,” Gipp says. “…there wasn’t a hunting opportunity for the whitetail deer until the 1950’s, and yet today we have that controversy between too many and too few.” Also on the recreation side, the state has seen the creation of 1,200 miles of bike trails.

Gipp says many people outside the state, and many who live here probably don’t realize all the natural resources that are available in Iowa.”We’re very proud of the accomplishments of the department and we hope that the citizens of Iowa have opportunities they wouldn’t have had without the work of the department, the work of the communities and the citizens of Iowa,” Gipp says. He says partnership of citizens, businesses and communities have help the DNR be successful in its first three decades.

The complete list of the 30 accomplishments is highlighted in the July/August 2016 issue of Iowa Outdoors magazine, and can be found on the DNR’s website.