You are here: Home / News / Ernst says Trump was ‘thoughtful’ during their private meeting 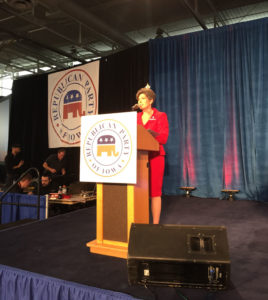 Senator Joni Ernst today said her recent private meeting with Donald Trump revealed a side of the candidate not many have seen in public.

“There were a number of concerns that he has about children that are growing up in the inner city. He has wonderful ideas and thoughts about education and making sure our children succeed,” Ernst told Radio Iowa during a telephone interview. “Those are things I haven’t heard him talk a lot about out on the campaign trail that I think really resonate with so many people across the United States. He was very thoughtful and, I thought, very caring.”

Trump quizzed Ernst about the political scene in Iowa and her successful 2014 senate campaign.

“He wanted to know: ‘What are the topics that Iowans are really concerned about?’ And so we reviewed a number of those issues,” Ernst said, “economy, tax reform and, of course, national security.”

The conversation happened in a “very small group setting,” according to Ernst.

“It was a great meeting,” Ernst said, “and I enjoyed the opportunity to sit down with him and talk more about what’s important to us.”

In May, Ernst said she hoped Trump would start focusing on policy rather than on personality on the campaign trail. Today, Ernst used words like “attentive” and “very thoughtful” to describe Trump’s demeanor during their recent conversation.

“That just really struck me and I was glad to have that opportunity and that time with him,” Ernst said.

Ernst repeated what she told reporters in Washington, D.C. earlier today, that the Trump campaign has not given her any documents to fill out that would be the basis for the background checks potential vice presidential running mates are required to undergo.  Ernst told a reporter for the Washington, D.C. publication “Politico” that she can provide the best “assistance” to Donald Trump as a senator rather than as his running mate.

Ernst spoke briefly with Radio Iowa early Wednesday afternoon. When asked directly if she could envision being Trump’s vice president, Ernst said “any number of Republicans” could fulfill that role.

“That’s entirely his decision and he will most certainly pick the right person for his ticket and I look forward to supporting that ticket,” Ernst told Radio Iowa.

Ernst told the Politico reporter she is just getting started in the U.S. Senate and expects to be an “advocate” for Trump on the campaign trail. The New York Times is reporting the Trump campaign will give Ernst a prime-time speaking slot at the Republican National Convention in Cleveland later this month.

(This post was updated at 8:30 pm with additional information)