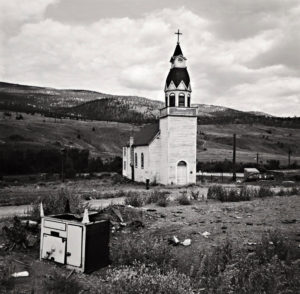 David Plowden photo of an Indian reservation in British Columbia.

An eastern Iowa art museum is opening an exhibit featuring more than 70 black-and-white photographs by David Plowden, works that were donated to the museum by the acclaimed photographer.

Andrew Wallace, manager of collections and exhibitions at the Figge Art Museum in Davenport, says Plowden was born in 1932 and grew up in New York City.

Wallace says, “Bridges and ferries and tugs and steam locomotives fascinated him and experiencing those things first-hand as a small person impressed him and images of them became his lifetime pursuit.” Plowden, who’s now 83, also documented small town life in communities that surrounded industry like steel mills and coal mines, what Wallace says is evidence of a more prosperous past.

“His interest begins with the fascination with these things but then it transforms into a concern for our collective technological heritage,” Wallace says, “and also a concern for the environment and the environmental degradation that goes along with progress and change.” Plowden spent much of the second half of his 60-plus-year career pursuing another passion, capturing images of the American prairie.

Wallace says, “There is a gallery guide with an essay that I wrote that talks about Plowden and his interest in this non-traditional subject matter, the prairie, as being a sublime alternative to the grand works of photographers like Ansel Adams.” He calls Plowden’s images “hopeful” and says they express “a personal vision infused with a sense of wonder and reverence for the American landscape and the ingenuity of man.” The exhibit will be at the Figge through September 11th and admission to the museum is free all summer.