The Iowa Division of Criminal Investigation is investigating a possible fake claim of a winning lottery ticket.

Iowa Lottery spokesperson, Mary Neubauer says the investigation involves an attempt to cash in a ticket last month. She says a wining ticket from the $20 scratch game called the “250,000 Dollar Riches” was presented at the regional office in Storm Lake for the top prize of $250,000 on June 17th.

Neubauer says the ticket raised a lot of questions. “There was scribbling over nearly all of the back of the ticket when it was brought into our office, so the claim attempt was referred to our security division,” Neubauer says. “I’m sure you have heard us say many times through 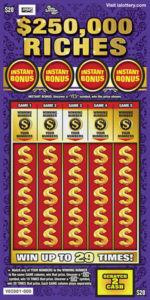 the years that we follow security procedures in any prize claim because we need to be sure the ticket was legally purchased, legally possesses and legally presented.”

Neubauer could not reveal the identity of the person trying to cash in the ticket. “What I can tell you is that and many other details are exactly what are being investigated in this case,” she says. She was asked if there is security camera footage of the person buying the ticket, but did not confirm that.

“Certainly security camera footage is a standard part of many of the investigations that we conduct here at the Iowa Lottery. It is definitely a useful tool and it is something that we utilize in many, many instances,” according to Neubauer. Everything is on hold until the investigation is completed.

“At this point the prize has not been paid, pending this investigation,” Neubauer says. The DCI is working with the Iowa Lottery and the Buena Vista County Attorney’s Office to try and sort out if there is any wrongdoing in the attempt to cash in the ticket.