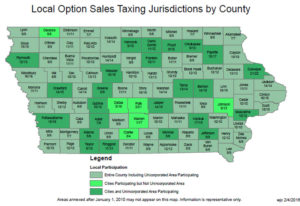 The one percent local option sales tax is now being collected in 11 cities in Warren County. Indianola plans to use its share of the new tax money to pay for a new wastewater treatment plant. Warren County officials plan to use a quarter of the county’s portion for property tax relief and the rest to finance construction of a new county courthouse and jail.

Other Warren County communities have plans to use the money for streets, sidewalks and other city expenses.

Warren County voters approved the new tax earlier this year. Victoria Daniels, the public information officer for the Iowa Department of Revenue, says voters knew how the money would be used.

“On the ballot they have to have a revenue purpose statement and say: ‘Here’s what this money will be used for,’ and that’s what the voters are voting on,” Daniels says, “not only that a.) they agree with having this tax, but b.) they agree with the purpose.”

Also on July 1, a 7 percent hotel/motel tax officially took effect in the Carroll County community of Manning. A new Boulders Inn and Suites Hotel is scheduled to open in Manning this October.

A one percent sales tax went into effect in the tiny southwest Iowa community of Blockton on July 1. The community plans to use the new sales tax revenue for street repairs.

The local option sales tax that has been collected in the communities of Storm Lake, Alta, Rembrandt and Lakeside in Buena Vista County is now permanent, as of July 1. It had been set to expire.