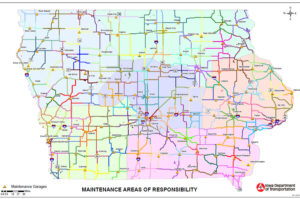 The Iowa DOT is closing driver’s license stations in Carroll and Spencer on August 31. The closures are part of an overall downsizing plan.

“I’m disappointed,” says Representative Brian Best, a Republican from Carroll. “I’m just hoping we can get those folks employed.”

Best hopes some workers might shift to the county treasurer’s office, where some Carroll County residents will now go to renew their driver’s license.

The DOT will close seven maintenance garages, too. Those facilities are located in Akron, Centerville, Corning, Gowrie, Rock Valley, Sabula and Soldier. The 28 employees who work out of the soon-to-close DOT facilities will be given a chance to work in other DOT offices with “higher service demands.”

This downsizing follows a budget fight in the legislature. Republicans in the House were skeptical of the DOT’s request for nearly $10 million extra to cover negotiated union salary increases and would agree to only provide half that much.

“When we told Iowans that we needed to increase the fuel tax so that we could repair bridges, build roads, do the things we needed to do to maintain our infrastructure, that was what we intended to do, not to do big salary increases,” Republican House Speaker Linda Upmeyer of Clear Lake told reporters in late April.

DOT officials say the extra tax revenue from last year’s increase in the state fuel tax must be used on roads and bridges and cannot be used to cover salaries.

“This is something that’s out of our control,” Republican Governor Terry Branstad told reporters in late April. “This is collective bargaining and an arbitrator’s decision.”

In mid-May, the DOT’s director announced he would hire more private consultants rather than full-time state employees, to save on salary costs. DOT officials announced this week that nearly 70 full-time positions in the department will remain vacant for the next 12 months as well.