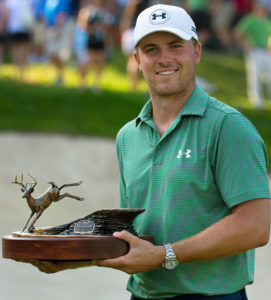 Jordan Spieth will not be returning to defend his title at next month’s John Deere Classic near the Quad Cities. Spieth announced on Monday that he will not be competing in the Rio Olympics and that fueled speculation about a possible return to the TPC at Deere Run.

Spieth made his intentions known in Scotland where he is preparing for the British Open.

“We totally respect that decision and accept it”, said JDC tournament director Clair Peterson. “We have a long track record with Jordan he has got a long track record of making really good decisions for himself and his future. We were especially pleased to hear his positive comments about our event and the fact that he will be coming back.”

Spieth also won the John Deere Classic as a teenager in 2013. This year’s tournament is August 11-14.