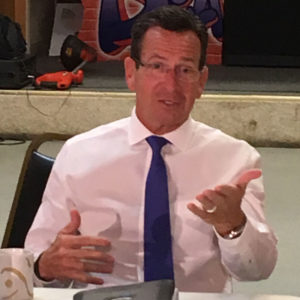 Connecticut’s Dan Malloy is one of eight Democratic governors coming to Iowa for the summer meeting of the National Governors Association.

He led a discussion in Des Moines this morning — organized by Hillary Clinton’s campaign — to discuss gun safety. Malloy called assault-style guns like the one used to shoot Dallas police last week “weapons of mass destruction.”

Connecticut lawmakers passed new state gun laws after that December, 2012 mass shooting at the school. Only 10 rounds of ammunition are allowed in a magazine, armor-piercing bullets are banned and more than 100 guns were added to Connecticut’s list of banned assault-style weapons.

Malloy said those stats are “proof common sense legislation does make us safer.” And Malloy argued there’s no issue that shows a clearer distinction between Clinton and Donald Trump than how each would deal with gun safety legislation as president.

“It’s ironic that Governor Malloy would come to Iowa to advocate for policies when residents in his home state oppose his own efforts,” she says. “In 2014, nearly 40 percent of Connecticut residents did not support the state’s tighter gun control laws and last year, state media found resident’s owned nearly 52,000 assault rifles.”

Connecticut residents who legally owned assault-style weapons before the ban went into effect two decades ago were allowed to get permits for those guns.

(This story was updated at 2:22 p.m. with additional information.)