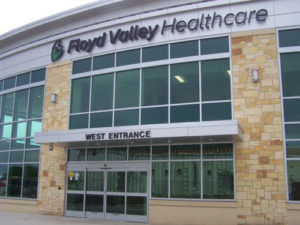 A northwest Iowa hospital was recently honored as a top hospital in the nation. Floyd Valley Healthcare of Le Mars was named as one of the nation’s top 50 “Critical Hospitals to Know” on the Becker’s Hospital Review website.

Floyd Valley Administrator Mike Donlin explains the listing is an accumulation of various past honors. He says the website looked for all the recognitions that rural hospitals are receiving and compiled a list of those getting the most recognition.

“They also noticed that we are among six hospitals in Iowa with the cleanest rooms as reported by patients in Medicaid’s national survey of patients,” Donlin says. Donlin was not aware they had been recognized by the website until he got a call from a colleague in South Dakota.

He says the colleague called him and said “good job” and he was not sure what he was talking about. Orange City and Estherville were two other Iowa hospitals to have made the Becker’s listing.