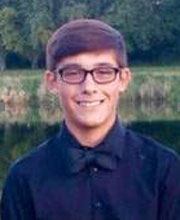 Hundreds of people gathered for a candle-light vigil in Iowa City last night to remember a teenager who died after being hit by a minivan.

Sixteen-year-old J.C. Meardon was struck in a roadway on Monday night while playing a game called “Hostage” with friends. Meardon’s friend, Miles Morrow, told KCRG-TV the large turnout at the vigil says a lot about Meardon’s character.

“It would mean a lot to him to see all of these people coming together,” Morrow said. Meardon was on the City High soccer team. The coach of team presented his family with JC’s number 12 soccer jersey and said the team will retire the number.

Police say the driver of the van, Julia Elgatian of Iowa City, was cited for not having a valid license.