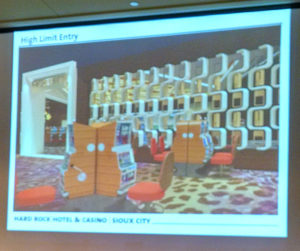 Architect drawing of part of the proposed addition to the Hard Rock Casino.

The Racing and Gaming Commission gave unanimous approval to the project after a presentation by general manager Todd Moyer. Moyer says this allows them to move ahead and add 7,500 square feet.

He says it is the last regulatory approval that they needed as the Sioux City Planning and Zoning Commission and city council have all given approval. Moyer says they hope to start construction as soon as possible.

“We think we will actually be in the dirt within 30 days and then open six months after that, so that puts us in the February 2017 time frame — not that I want to commit to an actual grand opening ribbon cutting yet,” Moyer says. The plans call for adding some slot machines and a wine bar. The Hard Rock is expanding after replacing the Sioux City Belle riverboat casino around 20 months ago. 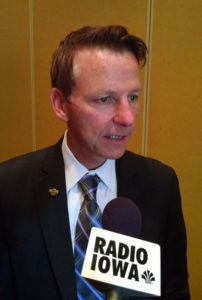 “The property has done very well, it has been very well accepted by Siouxland and the surrounding communities. But what we’re seeing is people are coming from farther distances to really see what all the talk is about, so to speak,” Moyer says. “I think what we are most excited about is this is not just another gaming expansion — it is that, it’s 60 slot machines and two table games — but really it’s a new bar experience for us. This concept of a wine bar, something we really don’t have now.”

He says they will seek to make the wine bar a destination in itself.

“We will be looking for a wine spectator award for the wine list that we are putting together as we speak, 125 different labels, 600 bottle capacity, 32 great bottles of win available by the glass,” according to Moyer. Moyer says the amenities that surround the casino have been a big driver in its success. He says they’ve had some people visit from outside the Tri-state area and the 50-mile range that you would normally expect.

“They are coming for the hotel, they are coming for the restaurant product . Entertainment is a big driver for us — in fact just since we’ve opened, we’ve sold tickets to 150-thousand people, hailing from all 50 states,” Moyer says. The Hard Rock saw gross revenue of $83 million in the fiscal year that just ended in June.