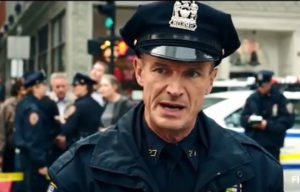 An Iowa native has a small role in the big-budget movie “Ghostbusters,” opening nationwide today.

Marshalltown native Toby Huss has 114 acting credits in movies and TV shows, but he says getting the call from director Paul Feig was particularly special.

“Paul called up and said, ‘Come do a thing,’ and I said, ‘Sure!,'” Huss says. “It was really fun. He’s a great director and those girls, they’re the funniest people on the planet right now so, it’s going to be funny.”

Huss interacts on-screen with the new all-female quartet of spook hunters. The 49-year-old Huss lives in Los Angeles and says it’s a thrill to have even a tiny part in the 154-million dollar film. He was a student at the University of Iowa in 1984 when the original “Ghostbusters” blockbuster hit the screen.

“It’s a good feeling, it’s a notch on the American cultural timeline,” Huss says. “It’s always fun to be a part of that sort of stuff. You do a lot of movies and TV shows that come and go really quick. For all I know, this one will come and go really quick, but I don’t think it will. It’s a significant little hunk of Americana and it’s nice to be a part of that.” Huss plays a New York City cop who interacts with the spectre-chasers and is skeptical. “You know, the cop can’t believe the Ghostbusters,” Huss says, taking on a New York accent. “It’s a bunch of girls chasing ghosts. How can you believe that, c’mon?”

Huss was on-set in Boston last summer for two days shooting several scenes, but he got to share the screen with stars Melissa McCarthy, Kristin Wiig, Kate McKinnon and Leslie Jones.

Huss has acted in a host of programs, ranging from “Reno 911,” “Jerry Maguire” and “42” to multiple voices on the animated “King of the Hill,” but he’ll be returning to TV in his latest dramatic role on the 1980s-set “Halt and Catch Fire” which premieres its third season on AMC next month.

Huss first appears at 8:57 in this special “making of” preview video.