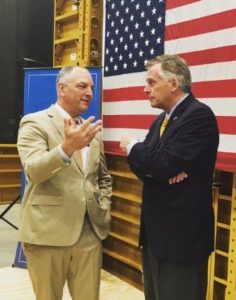 “Unfortunately this has been a horrible partisan issue in the presidential election. Unfortunately a lot of rhetoric has been out there, but for the three of us up there, standing together, to us it’s about jobs,” McAuliffe said this morning in Des Moines. “If we don’t get this TPP done, China will write the rules in Asia.”

Louisiana Governor John Bel Edwards, a Democrat, said trade is key for his state, since one of the world’s largest ports is in Louisiana.

“In addition to the manufacturers and the farm products that we actually produce in Louisiana that we’re looking to export, we’re also facilitating the export of products from across the country, including agricultural products right here from Iowa, so it is a big deal for Louisiana, the Trans Pacific Partnership,” Edwards said, “especially in light of the Panama Canal being expanded for larger vessels, so we’ll have an opportunity to capture more of the market.”

Edwards, McAuliffe and Branstad joined President Obama’s U.S. Trade Representative at a Des Moines business to tout the Trans Pacific Partnership. Branstad described himself as a “strong supporter” of free trade and the TPP because it’s important to agriculture.

“It’s not perfect and I accept some constructive criticism that maybe we can do better, but let’s continue to build on breaking down these barriers in opening up markets and if we do that, we benefit,” Branstad said. “We create jobs and we grow farm income.”

Republican presidential candidate Donald Trump has vowed to renegotiate a host of U.S. trade deals if he’s the next president and he’s called the TPP “insane.” Gary Herbert, Utah’s Republican governor, is chairman of the National Governors Association, and he weighed in on the issue, too, during a news conference before the NGA’s meeting.

“We would call upon those who are fighting this on both sides of the aisle to come together. Let’s find a compromise and move ahead,” Herbert said. “…The president’s been on board. Many Republicans have been on board. Let’s bring everybody together and finally get this done.”

Herbert said since 93 percent of the world’s customers live outside of the United States, expanding trade opportunities is crucial.

“As we do that, we will foster better relationships,” Herbert said. “It’s not only just for economic benefit, but it will help bring about more world peace and understanding and harmony that comes with economic trade, so on many levels it’s an important thing to do.”

Eighteen governors are in the meeting room this afternoon. They’re having a discussion with federal officials about the opioid epidemic. Later today officials from Japan, Zurich and the Organization for International Investment will visit with the governors about foreign investment in the states. Tomorrow, U.S. Ag Secretary Tom Vilsack — the former Iowa governor — is scheduled to meet with the group of current governors. They’ll discuss “how farmers, chefs and food entrepreneurs” are spurring the economy.