You are here: Home / News / Ernst will ‘come out swinging’ in her speech at Cleveland convention (AUDIO) 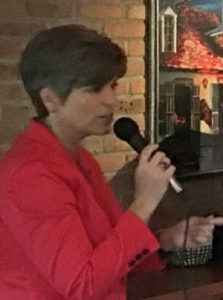 Iowa Senator Joni Ernst, the former commander of an Iowa National Guard battalion, will be speaking in “prime time” during the first night of the Republican National Convention in Cleveland and tonight she vowed to “come out swinging.”

The theme for the first night of the convention is “Make America Safe Again” and Ernst told a group of Iowa reporters early this evening that she is scheduled to step on stage at 9:36 p.m. Iowa time Monday. She’ll speak for about 10 minutes. Ernst described it as a “big deal” — even bigger than delivering the Republican response to President Obama’s State of the Union speech.

“I think this will probably be more intimidating,” Ernst said, “because we will be in a convention center with people out there and then also knowing that a lot of people across the United States are going to be watching.”

Ernst told reporters her family will be watching from southwest Iowa.

“My mother said she would make sure to go down to my house in Red Oak and watch it with my husband and my daughter. Her TV has been cutting a little in and out lately, so she wanted to know what time, so she could be sure to watch it,” Ernst said, laughing.

Ernst is the first female combat veteran to serve in the U.S. Senate. The Iowa Guard battalion Ernst once lead in Kuwait and Iraq has been on active duty in Afghanistan for about a month.

“I think about those people when I’m putting together talks or discussions like this,” Ernst said, “so I’ll come out swinging.”

Ernst may have given a little preview early tonight when she spoke briefly to the Iowa Republican delegates in Cleveland for the party’s national convention.

“Our world is virtually imploding if we look around us,” Ernst said. “And why is it doing that? It’s because we have a lack of leadership coming out of the White House right now.”

Ernst said Republicans across the country “are counting on us to do the right thing…pull together” and nominate a “strong leader.”

That, as you probably know, is a clear reference to Ernst’s 2014 campaign ad. She talked about castrating pigs on the farm and promised to cut pork in Washington. Ernst told Iowa reporters who’re in Cleveland covering the convention she’s looking forward to her big speech.

“I’m not so nervous,” Ernst said. “I am really excited about it.”

Ernst has been practicing the speech and will be in the convention hall for a run-through later Monday morning. Ernst has never been to a national political convention.

Ernst will be wearing a borrowed jacket and her footwear might be familiar.

“I might be wearing some camo shoes,” Ernst hinted.

Ernst wore that pair of dress shoes with a camouflage pattern when she delivered the Republican response to the State of the Union message in 2015.

Ernst noticed as she was making some stops in southeast Iowa on Saturday that she was “getting a head cold.” Ernst flew to Cleveland Sunday and as she spoke with reporters a few hours later Ernst still couldn’t hear out of one ear. She intends to “drink a lot of hot fluids,” plus spend most of Monday “getting in the groove” by practicing her remarks.