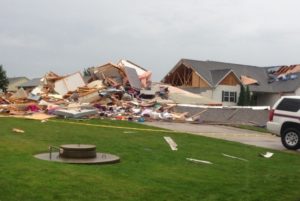 Storms rumbled across Iowa this morning, leaving behind widespread damage.

In eastern Iowa’s Benton County, strong winds ripped a roof off a home in Walford. Firefighters rescued a 27-year-old man who was trapped inside the collapsed home. In nearby Vinton, apartment buildings and homes were damaged by high winds and several residents were taken to a hospital with minor injuries.

In north-central Iowa, Eagle Grove Mayor Sandy McGrath met with reporters this morning after storms passed through Wright County. “Vehicles damages, many power lines down…most of the town does not have power,” McGrath said.

In Kossouth County, a tree fell on a house in Burt. And in Renwick in Humboldt County, an implement and farm supply store lost part of its roof, a grain bin collapsed and trees were toppled.