You are here: Home / News / Vilsack back in Mount Pleasant as speculation swirls about his VP chances 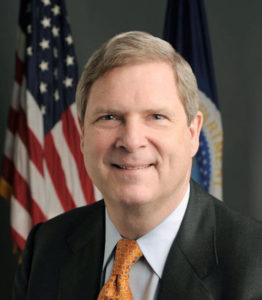 Former Iowa Governor Tom Vilsack was in his adopted hometown of Mount Pleasant this weekend, just as speculation is rising about the possibility Hillary Clinton might choose him as her running mate.

“I can’t comment on any of this,” Vilsack said during an interview with KILJ Radio. “I would say that this is an incredibly important time for the country and I’m confident that whoever Hillary chooses, that that person will compliment her and I think we’re going to have a very interesting time in the next couple of months.”

Vilsack and his wife, Christie, have a long relationship with Clinton. Tom Bell, Christie Vilsack’s late brother, worked with Clinton in the 1970s. The Vilsacks endorsed Clinton in the spring of 2007 after Vilsack, the two-term governor, ended his own presidential campaign. Vilsack endorsed Barack Obama in the summer of 2008 and has been Obama’s first and only Secretary of Agriculture.

On Saturday, Vilsack spoke to a huge crowd in Mount Pleasant at the rededication of a monument. The memorial fountain is named for former Mount Pleasant Mayor Edd King. King was shot to death by an angry resident during a city council meeting in 1986. King’s father recruited Vilsack to be the town’s next mayor.

During an interview with NBC News on Saturday in Mount Pleasant, Vilsack compared presumptive GOP presidential nominee Donald Trump to Bernie Madoff. Madoff is the  New York-based financier whose “Ponzi scheme” is considered the largest financial fraud in U.S. history.