You are here: Home / Military / Ernst, in RNC speech, says Clinton ‘has failed us too many times before’

Joni Ernst on stage in Cleveland.

“Her judgment and character are not suited to be sitting in the most powerful office in the world,” Ernst said. “She has already failed us too many times before.”

Ernst said the policies Clinton pursued as secretary of state in places like Libya, Afghanistan, Iraq and Syria had failed to “stop the expansion of terrorism.”

“Shockingly, she continues to support a policy that brings captured terrorists into our back yards. All of us up here believe that’s unacceptable,” Ernst said, drawing applause from the crowd. 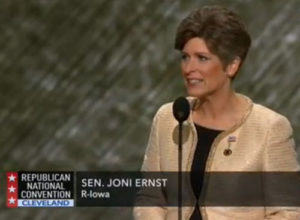 Ernst blasted Clinton’s decision to use a private email server when she was secretary of state, prompting some in the crowd started chanting: “Criminal”

“With Hillary Clinton, it’s always about her. It should be about you,” Ernst said, to applause. “Donald Trump is focused on you!”

Ernst began her remarks with own biography, praising the “tenacity” she learned from her own mother.

“She really encouraged us. You never hear her say: ‘No, you can’t do this,'” Ernst said. “Instead, if something was challenging, she’d say: ‘Joni, we’ll figure out a way. If this is what you want, let’s make it happen.'”

Ernst said she’s working on sharing those same life lessons with her own daughter. Ernst’s husband, daughter and mother were in Red Oak tonight, watching the speech on television.

Ernst’s speech was originally scheduled for “prime time,” but the program ran long and she didn’t begin speaking until after 10 o’clock Iowa time.