You are here: Home / News / Walker: Trump’s better than Clinton, even if he was ‘your 17th choice’ (AUDIO) 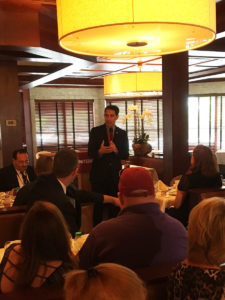 Wisconsin Governor Scott Walker this morning said nothing has “improved” his opinion of Donald Trump more than Trump’s decision to choose Indiana Governor Mike Pence as a running mate.

“Mike Pence is a Midwesterner through and through,” Walker said. “He is exactly the kind of leader that we need to make sure that when Donald Trump is the next president and Mike Pence is the next vice president, he will make it clear that those good, sound Midwestern values are reflected in this administration going forward.”

Walker spoke this morning to the Iowa delegates attending the Republican National Convention in Cleveland.

“The press sometimes has asked me of late what I think of our nominee. Well, he wasn’t my first pick,” Pence joked, getting laughter from the Iowans. “I was my first pick.”

Walker dropped out of the 2016 presidential race in mid-September of last year, before the voting began. Walker said he pledged nearly a year ago during the candidate debate in Cleveland that he would support the party’s 2016 presidential nominee. 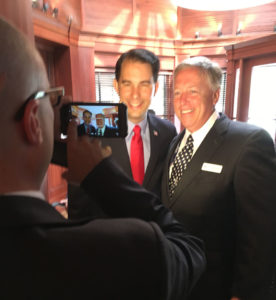 “I didn’t have my fingers crossed behind my back. I actually said what I meant and I mean what I say and it is clear that whether Donald Trump was your first choice or your second choice or your seventeenth choice, I hope you understand that Donald Trump is better,” Walker said, “better than Hillary Clinton.”

Walker spoke to the Iowa delegates for about 15 minutes.

“Have a great party at the convention and we’ll see you back in Iowa,” Walker said at the end of his remarks.

Walker spoke with reporters after his speech and didn’t rule out another run for the White House.

“Somebody told me in September I could wait 20 years and I’d still be younger than Hillary,” Walker said, “so I don’t know if I’ll do that, but — if anything — I’ll probably focus on running for reelection in 2018 as governor.”

If Donald Trump loses in 2016, Walker indicated he will not run for president again in 2020.

“What I found this last time is…it makes it difficult to be the candidate you need to be to win if you’re still in office as governor,” Walker said. “So if I run in 2018 again, I would fulfill my term.”

Walker was in Des Moines last weekend for the National Governors Association summer meeting. He met with a group of Iowans who supported his short-lived 2016 presidential campaign for an outing at the Iowa Cubs game.