You are here: Home / News / Cotton loves Iowa so much he married ‘a girl born in Iowa’ (AUDIO) 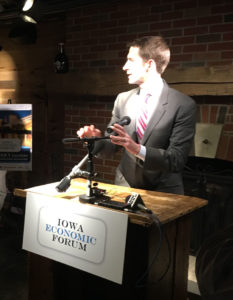 First-term Senator Tom Cotton of Arkansas — a potential presidential candidate of the future — connected with the Iowans in Cleveland for the Republican Party’s national convention.

“I know because you’re often the center of the political universe you get a lot of politicians coming in from other states and sometimes they’ll pander to Iowa a little bit,” Cotton said. “I’m not going to do that. I’m just going to say that I’m the only politician that will speak to you this week that loves Iowa so much that I married a girl born in Iowa.”

Cotton’s wife grew up in Nebraska, but she was born in Sioux City.

“Her little farm town in Nebraska didn’t have a hospital big enough to deliver babies, but I think that’s somewhat emblematic of her and my and so many of your upbringings out on the farm in places like Iowa and Arkansas where we learned the lessons that stood us well both as individuals and also stood us well as a nation,” Cotton said, “and as a party.”

Cotton spoke at an “Iowa Economic Forum” event for Iowa GOP convention delegates that was held at a Cleveland brewery with a special “Grand Old Pilsner” on tap. During his 14-minute speech at the mid-day event, Cotton urged Iowa Republicans to resist being “defensive” when Democrats accuse the GOP of being “scary.”

“We don’t have to show we can govern,” Cotton said. “We have been chosen as America’s governing party time and time again from the courthouse, to the statehouse, to the congress and, this fall, to the White House.”

Cotton was first elected to the U.S. Senate in 2014. He gained national attention in 2015 when he authored a letter to Iran, warning that he and other Republican senators weren’t interested in ratifying the Iran nuclear deal. Cotton said the deal is “appeasement of our enemies.”