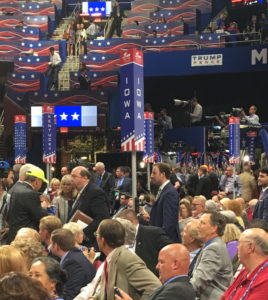 A majority of the Iowa delegates at the Republican National Convention supported Ted Cruz’s bid for the White House. They’ll hear directly from the Texas Senator tonight when Cruz speaks at the convention.

Former Iowa Secretary of State Matt Schultz — the chairman of the Iowa delegation in Cleveland — served as the Cruz campaign chairman in Iowa.

Schultz said the prospect of having Hillary Clinton appoint justices to the Supreme Court “will definitely be on everybody’s mind” and a motivating factor for GOP voters.

Delegate Jason Schultz of Schleswig is a state senator who was part of Cruz’s Iowa Leadership Team, too. He predicts Cruz will be a unifying force tonight.

“I’m expecting him to give what he is so fantastic at, which is that ‘red meat’ rallying speech that brings people together, but this time it’s different. It’s not him at the top,” Schultz said this morning. “I’m expecting him to rally the troops for our nominee, in a way that only he can.”

Delegate Dennis Guth, a state senator from Algona, is another state legislator who endorsed Cruz before the Iowa Caucuses.

“He’s always thought further ahead than what I can and I appreciate where he’s at and what he’s saying,” Guth said this morning. “I don’t think he’s going to try to blow the party apart.”

Bob Vander Plaats, president of  “The Family Leader” organization — a Christian conservative group based in Iowa, is a delegate to the Republican National Convention. Vander Plaats predicted Cruz will lay out a “positive vision” tonight about how “conservative principles work.”

Vander Plaats endorsed Cruz before the Iowa Caucuses. He’s met with Donald Trump twice in the past two months.