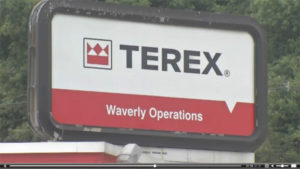 After 75 years in Waverly, the Terex Cranes operation is closing. Manufacturing will be shifted to a Terex facility in Oklahoma City.

Around 175 employees are affected, approximately 100 of those are members of UAW Local 411. The president of Local 411, Kent Fisher, says the official word came around 2:30 Tuesday afternoon and his more than  30-year career with the company ended abruptly.

“Basically they told us it was in the best interest of the company to close our facility in Waverly and move it to Oklahoma,” Fisher says. “And basically told us we were done right away, to leave, exit the premises, and to no come back unless you had an appointment to pick up any personal belongings in the plant. They said they’d get ahold of us talking about a severance package.”

Fisher told KCRG TV there had been rumors of closing for awhile and more recently there were signs. He says the paint line broke down two weeks ago and it hadn’t been fixed. “So we kind of figured something was going on — thing were breaking, hoists were breaking — they weren’t repairing them.” Fisher says the closing will hit the entire Waverly community.

The remaining 75 non-union workers will be laid off gradually. Some may have an opportunity to relocate to Oklahoma. Terex Company officials confirmed the move in a news release.