You are here: Home / News / As Vilsack VP speculation escalates, a look back at Clinton-Vilsack alliance 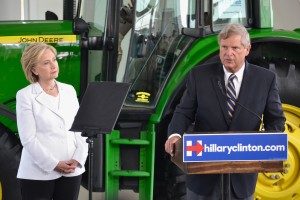 Former Iowa Governor Tom Vilsack is rumored to be among a small group of people Hillary Clinton is considering as a running mate. Vilsack served eight years as Iowa’s governor.

As Vilsack exited that job in early 2007, he offered these parting words for state lawmakers and his successors.

“While challenges clearly remain, we have built a state better prepared for what lies ahead. I have given it my all and I have done my best, but as I leave, I’m confident,” Vilsack said during his last “Condition of the State” message as governor. “I’m confident that Iowa’s best days are yet to come.”

Vilsack launched his own campaign for president in late 2006 in his adopted hometown of Mount Pleasant. Vilsack dropped out of the race three months later, then he and his wife, Christie, endorsed Clinton in March of 2007. 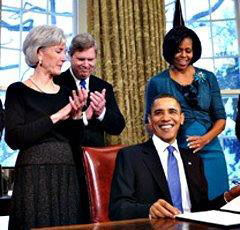 “We have a personal relationship that goes back to Christie’s brother, Tom, who was one of my great friends and someone I miss on a regular basis. He could make you laugh. He could ask a piercing question. He could put you in your place,” Clinton said at the endorsement event, held on the lawn of an elementary school in Des Moines. “And I also watched with great admiration the campaign and then the administration that Tom and Christie provided to this state.”

Hillary Clinton and Christie Vilsack’s late brother, Tom Bell, were lawyers who worked on a congressional committee gathering evidence on the Watergate scandal of the 1970s. Clinton has often talked in Iowa about hearing Vilsack speak at a fundraiser she hosted in Washington, D.C. in 1998.

“Tom Vilsack gave one of the best political speeches I’ve heard from anybody in our country. Some of you might have been there,” Clinton said in late March of 2007. “He held up a ‘Big Chief’ pad in one hand and a laptop in the other and he basically said: ‘We have to modernize education in Iowa.'”

Vilsack has been President Obama’s first and only agriculture secretary.

“Rural Americans want leaders who help the middle class communities to plant and prosper over the long term, not opportunists who reap the rewards for themselves, leaving nothing for the people who do the sowing,” Vilsack said during a speech at the Democratic National Convention in 2012.

This is the second time Vilsack as been considered for the second slot on the Democratic Party’s national ticket. In 2004, after John Kerry chose John Edwards as a running mate, Vilsack revealed he had secretly flown to California for a private meeting with John Kerry. Vilsack calls Clinton supremely loyal, and credited her for campaigning for him in 1998 when he was 23 points behind in his race to become Iowa’s first Democratic governor in three decades.

“This is a woman who will listen to us, who will fight for us, who will make sure that we win this election and when she does, she will deliver for us,” Vilsack said last summer. “She will make us proud.”

Vilsack grew up in Pennsylvania. He met Christie Bell of Mount Pleasant in college and the two settled in her hometown, where Vilsack practiced law with his wife’s father.