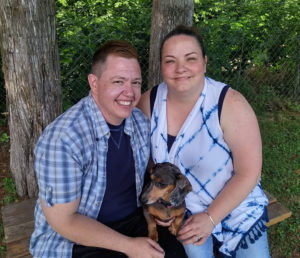 A nurse at the prison for women in Mitchellville has filed a complaint alleging he is being discriminated against because he has identified himself as transgender.

Thirty-four-year-old Jesse Vroegh was born a woman, but identifies as a man. Vroegh says he notified the Iowa Department of Corrections of his status in 2014.

“I said that I would soon be living full-time as a man at work. I requested that my employer establish polices related to issues affecting transgender employees, but nothing happened,” Vroegh says. “I asked to be able to use the men’s restroom and lockerrooms like my male co-workers. But instead I was forced to use a separate facility from everyone else and was denied the use of a shower entirely.”

Vroegh says the state has also refused to pay for surgery related to his transition. “I’ve also made many attempts to obtain medical insurance coverage for surgery I desperately need. But the state of Iowa employee insurance plans deny me that coverage just because I am transgender,” Vroegh says. He says he filed to the complaint to try and get some action in the issue.

“All I want is for my employer to treat me like my co-workers, by allowing me to use the work restrooms and lockerrooms that match my gender, and by offering me insurance for medical care I need,” Vroegh says. “I don’t want different treatment. I just want the same treatment and facilities as every other employee.”

Iowa ACLU attorney Rita Bettis is representing Vroegh. “All Iowans are entitled to fair and equal treatment in the workplace — and that includes those who are transgender,” Bettis says. “The state should be setting an example by creating a work environment that is free from discrimination on the basis of gender identity. But here it is just the opposite.” Bettis says the Iowa Civil Rights Act requires the state to accommodate Vroegh.

“Since 2007 the Iowa Civil Rights Act has required employers to treat all of their employees fairly. And that includes those who are transgender. That means that transgender employees must have the same access to single-sex spaces like restrooms and lockerrooms that’s given to other employees,” according to Bettis. Bettis says the chest surgery Vroegh is seeking to have covered by insurance is important to his transition, as it can lead to issues.

“We are talking abut really significant emotional and physical impacts, depression, anxiety. Transgender men who don’t have access to chest surgery engage in very painful binding — which also can have long-term health affects — some engage in self harm,” Bettis says. This is something that not only is the ACLU saying is medically necessary, the AMA says is medically necessary.”

The Iowa Department of Corrections released this statement on the complaint:

“As a very important part the Department of Corrections Mission, the Department strongly focuses to protect and treat with respect the public, staff and offenders. Due to a pending Civil Rights Complaint, the Department cannot comment at this time.”

Photo provided by the Iowa ACLU