The legislation would reduce mandatory minimum sentences for nonviolent drug offenders; enhance prison treatment programs to help keep people from reoffending, and allow people convicted of certain federal crimes as juveniles to clear their criminal records if they turn their lives around. Reverend Lee Schott of the United Methodist Church works with those in the womens’ prison in Mitchellville.

“As a pastor and on behalf of faith communities across the state of Iowa, I have had a lot of conversations about the inequities in the system, ” Schott says. “The disproportionate impact on persons of color and whole communities that bear the burden of the disproportionate impact.” Schott says she was pleased to see something happen on the issue. “In 2015 I was among 130 faith leaders who signed onto a letter to Senator Grassley asking him to allow legislation to move forward in this area, and I am grateful to him for hearing us and for taking the lead in conversations and in drafting and getting legislation on the table that is the Sentencing Reform and Corrections Act,” Schott says. 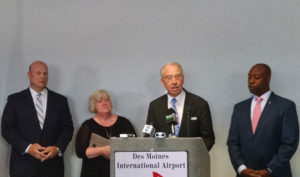 The bill cleared the Senate Judiciary Committee that Grassley chairs and is awaiting action by the full Senate. Fellow Republican Senator Scott says after years of working on sentencing reform, there is a positive feeling that the legislation will move ahead.

“I do think that we have a reason to be optimistic when you see the partners who are working together form the far right to the far left,,” Scott says, “it is an unusual experience in Washington to see the type of bipartisan coalition working on such an important issue — and an issue that over the last few years we’ve had many false starts.”

Scott says the effort has extended beyond politicians. “The other part of the process has been the outside organizations that have been involved on both the left and the right. It’s been really interesting to see the coalition of folks that I’ve at least had meetings with, from the Koch brothers to the ACLU — all at the same table working on the same projects — including the NAACP,” Scott says.

Scott says having Grassley come on board helped move the legislation ahead. “Previously it has been a left only conversation that bled over to the right. And now we have conservatives like Senator Grassley, myself, Lindsey Graham on our side. On the other side you have Corey Booker, Chuck Schumer,” according to Scott. Grassley says the legislation doesn’t just open up the prison doors and let people go. He says programs on the state level convinced him that federal legislation would work.

“We’ve seen great success in some states and I’ll just point out two — Texas and Georgia — maybe where you wouldn’t even expect these sort of reforms to go on and being successful, saving money and reducing recidivism — and that’s help me to move ahead on it,” Grassley says. House Speaker Paul Ryan announced last week that the House would be also considering several pieces of legislation to address criminal justice reform.

Scott and Grassley says the House is looking at a wider array of bills, but they expect both side to narrow in on legislation that can be passed.