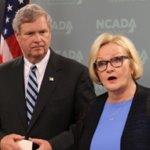 Former Iowa Governor Tom Vilsack was in Missouri yesterday as speculation swirled about his chances of being Hillary Clinton’s running mate. Vilsack spoke at the National Council on Alcoholism and Drug Abuse, a non-profit based in a St. Louis suburb.

“Forty-four percent of Americans know someone who is using and misusing opioids — 44 percent,” Vilsack said. “I mean, that’s an incredibly remarkable number.”

Missouri is the only state in the country that does not have a prescription drug monitoring system.

“It’s not just the folks in Missouri that are at risk because of the lack of a monitoring program,” Vilsack said. “It’s every state that surrounds Missouri because people from my home state of Iowa can come across the border.”

Vilsack told reporters he had a message for Missouri lawmakers who’ve blocked state laws that would have established that system.

Vilsack and Missouri U.S. Senator Claire McCaskill, a Democrat, held a roundtable discussion with drug and alcohol abuse counselors and other advocates for action on the opioid epidemic.

“We have to focus on prevention. We have to expand treatment. We have to create communities of support for recovery,” Vilsack said. “We have to have criminal justice reform and we also have to have some economic development opportunities in rural areas where this is a particularly acute problem because there is a lack of treatment facilities.”

Vilsack has been the U.S. secretary of agriculture since January of 2009. Reporters in Missouri asked Vilsack about being considered by Clinton as a running mate, but he declined to comment.