You are here: Home / News / New version of Romeo & Juliet as envisioned by Iowa man goes on stage 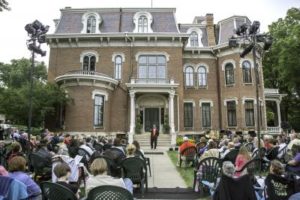 The 2015 performance at Terrace Hill

A play written by an Iowan that re-imagines one of the world’s most familiar tragic love stories is getting international acclaim and it’ll be performed for free tonight in the Des Moines area.

Robin Heinemann, executive director of the Iowa Shakespeare Experience, says “Romeo and Juliet: Thrice Told Tales” will also be performed next weekend at Terrace Hill in the governor’s back yard.

“This is asking the question, what would have happened if Romeo and Juliet hadn’t died so darn young and got married like the rest of us?” Heinemann says. “You can see where this might go. It’s very, very funny. It’s also very sweet and very tender.”

Created by Des Moines playwright Lorenzo Sandoval, the play placed in the top five favorites at the Channel the Bard international short play festival competition held in London through the Cambridge University Press.

“It’s a once-in-every-400 year contest because everybody around the world is celebrating 400 years since Shakespeare walked the earth,” Heinemann says. “It’s really a once-in-a-lifetime opportunity for us and we couldn’t be more thrilled.”

The play will be performed tonight outside at the historic Randleman House Museum in Carlisle and next weekend (July 29th and 30th), the show will go on behind the Iowa Governor’s Mansion, Terrace Hill.

“First of all, you’re up on a hill, so you’re catching all the breezes,” Heinemann says. “Secondly, we’re in the back so that giant stained glass window which we light at night just shines out over the lawn and all the colors sparkle. And, Terrace Hill just upgraded the reflecting pool so you can gaze out over that and over the lawn as well.”

All performances are free.