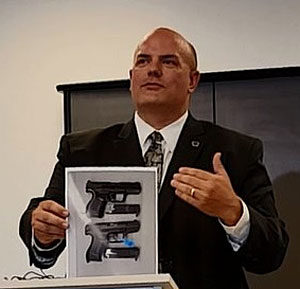 Two police officers in central Iowa have been cleared of any wrongdoing in the shooting death of a man last month.

Iowa DCI Special Agent Mike Motsinger says even though Disbrowe’s weapon turned out to be an airsoft pistol, the officers had very little time to react.

“They’re made very realistically and they’re made of metal,” Motsinger said of airsoft pistols. “They’re heavy and black…it’s dark outside. (The officers) have it lit up with their lights, but those officers have a split second.”

The officers were sent to a trailer park in Boone on the night of June 27th on the report of a man who was threatening people with a gun. When they arrived, the officers ordered Disbrowe to drop the weapon, but he allegedly pointed it at the officers, who then opened fire.

“With the way Mr. Disbrowe acted like he racked a live round into the chamber and…closed the reactionary gap between him and the officers…the officers, basically, felt their lives were in danger,” Motsinger said. Investigators, who reviewed video and audio of the incident, said the officers spoke with Disbrowe for 5 to 7 minutes trying to get him to drop the weapon.

At a news conference in Boone today Motsinger showed a picture of the airsoft pistol next to a nine-millimeter handgun. “It looks exactly like that nine millimeter and if someone is pointing that gun at me, I’d have a hard time not doing the same things those officers did whether it be 10 o’clock at night or 10 in the morning,” Motsinger said. “As you can see, there’s clearly nothing to distinguish that gun from the real gun,” Motsinger said.

The DCI’s investigation also found Disbrowe “had ingested alcohol and drugs and appeared to witnesses to be depressed on the day of the shooting.”