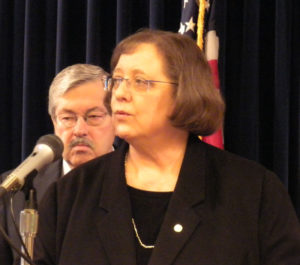 The Marshalltown, Norwalk and Martensdale school districts are part of a pilot program with the state announced today that will the schools to use the Iowa Communications Network to create a high-speed wireless internet link for police, state troopers and public safety officials.

“In an emergency you need to have a whole variety of ways to communicate, and this is just another way to do that,” Ryan says. “In addition we do have an interface between the radio system and aps on phones — so that it is going to be possible to connect this with inter-op and we can have a coordinated response if we need to do that as well. So, having more options is always safer.”

Ryan says in the worst case scenario, police could call up school cameras to see what is happening. “In an active shooter situation having access to those surveillance cameras is extremely important. It’s going to be able to tell us where the individual is and so for the first responders — if they are able to tell where the danger is — they can stay safer, and they can keep the children safer as well,” according to Ryan. 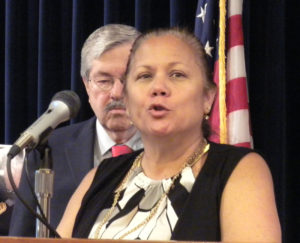 Marshalltown High School principal Jacque Wyant says she used to work in Sioux City and they have a system where a couple of administrators could call up the cameras in a school. Wyant says that system was limited in how it could be used. Wyant says it was hard to quickly get information from that system, but this new system they are testing in Marshalltown allows the entire administrative team the ability to quickly get information.

Commissioner Ryan says WISE will make schools safer in another ways as law officers will stop at a participating school and use the fast wi-fi to download their daily reports.

“The primary advantage I think is the deterrent affect of having the public safety vehicles present at the time. Simply having people there is a good deterrent to anybody who is interested in attacking a school,” Ryan explains.

Governor Terry Branstad is not sure how many schools might eventually participate in the system. “It’s pretty hard to predict at this point, but we have the advantage of the ICN and the robust capacity that’s there. This is just another way to utilize that to help protect our children. We’ll be anxious to see how this goes in the three schools that do it this year. And then depending upon how that goes, we’ll see how many other schools want to do it,” according to Branstad. He says there is no cost to the schools in the pilot as three vendors are providing services to help.

The governor and commissioner Ryan say the system will be secure to protect any confidential information officers send across it. The state will be field testing the pilot projects throughout the next year. The two made the announcement at Branstad’s weekly news conference.