You are here: Home / News / Weaver would like MSNBC invite, to offer rebuttal to King 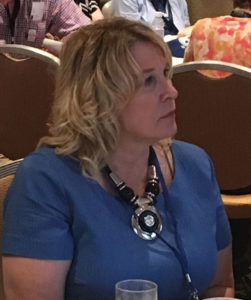 The Democrat who’s running against Congressman Steve King says it was “difficult to watch” King and his fellow Republicans at their national convention in Cleveland last week.

“The hate and divisiveness, doom and gloom and fear — that’s not the country I live in,” says Kim Weaver.

Weaver  is in Philadelphia this week, meeting with Iowa delegates at the Democratic National Convention. King attracted national attention last week during a cable TV talk show. He blasted “leftist” attacks on “old white guys” and argued no other subgroup had contributed more to western civilization.

“His forte is saying things that get him in the news instead of actually doing things for Iowans,” Weaver says. “And that’s what we really want to do is focus on solutions instead of division.”

Weaver says would like to be invited on MSNBC to offer a rebuttal to what King said.

“You know, they put him on there,” Weaver says. “They should put me on there.”

Weaver lives in Sheldon. She is a social worker employed by the State of Iowa to be an advocate for senior citizens in nursing homes and assisted care facilities in a 15-county area of northwest Iowa.