You are here: Home / News / Donald Trump to campaign in Iowa Thursday 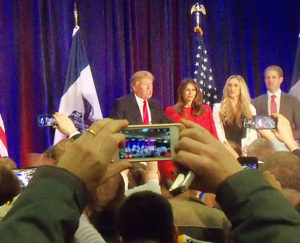 Donald Trump talks to supporters after finishing second in the Iowa Caucuses.

Donald Trump is coming to Iowa for the first time since he secured the Republican nomination for president.

It will also mark Trump’s first trip to the state since he finished second in the Iowa caucuses. On the night of February 1, Trump recalled how “everybody” told him not to campaign in Iowa.

“I was told by everybody, ‘do not go to Iowa, you could never finish even in the top 10.’ And I said: ‘But I have friends in Iowa. I know a lot of people in Iowa. I think they’ll really like me. Let’s give it a shot.” They said: ‘Don’t do it.’ I said: “I have to do it,'” Trump said. “And we finished second and I want to tell you something: I’m just honored. I’m really honored.”

Trump will hold campaign rallies on Thursday, both in eastern Iowa. They’re scheduled for 4 p.m. at the Adler Theater in Davenport and 8 p.m. at the DoubleTree by Hilton Hotel Convention Complex in Cedar Rapids. On caucus night, Trump predicted he would become the GOP nominee.

“We will go on to get the Republican nomination and we will go on to easily beat Hillary or Bernie or whoever the hell they throw up there,” Trump said. Free tickets are available for both of Trump’s campaign stops in Iowa on Thursday.

Trump will be speaking in Iowa on the same evening Hillary Clinton is on stage in Philadelphia to formally accept the Democratic Party’s presidential nomination.